A successful start for Koenig & Bauer at China Print

An impressive show accompanied the launch of the new Rapida 105

The China Print trade show kicked off with a bang in Beijing on 23 June, marking the worldwide launch of the new Rapida 105 at the Koenig & Bauer stand. More than 150 visitors were in attendance to witness the unveiling of the new press. And over 1,000 more followed the launch via a live stream. The trade show is open until 27 June, and is giving Koenig & Bauer a perfect opportunity to showcase some of the very latest printing equipment and technologies on a revamped stand extending over more than 1,000 m2. A steady stream of visitors was welcomed on the first days of the show. 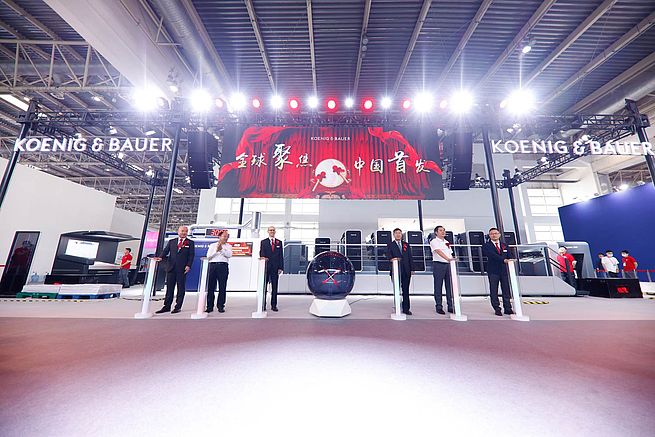 The curtain has been lifted: the new Rapida 105 is distinguished by its enhanced automation and many technical details adopted from the makeready world champion Rapida 106 – all developed and manufactured entirely in Germany,

In a recorded message, Koenig & Bauer management board spokesman Dr Andreas Pleßke greeted the visitors, underlining the fact that “Koenig & Bauer views China as one of the most important global markets, and one with a promising future.” Ralf Sammeck, director for the Sheetfed segment and CDO of Koenig & Bauer, and Dietmar Heyduck, senior vice president for sales, introduced the new Rapida 105 generation in a series of video clips. Ralf Sammeck explained that “users of the new sheetfed press generation would not only be investing in the very latest printing technologies, developed and manufactured entirely in Germany, but also be securing a competitive advantage that will raise their business success to new levels.”

Latest technologies for users in China and worldwide

Walter Zehner, CEO of Koenig & Bauer Greater China, extended his own warm welcome to the visitors and thanked Chinese print customers for the confidence they have placed in Koenig & Bauer over the past decades. He was particularly pleased to point out that “our Chinese market is of such great importance for Koenig & Bauer that Beijing was chosen for the worldwide market launch of the Rapida 105.”

The first live presentation of the new generation of Rapida 105 presses was hosted by Lianbiao Wang, general manager of sales at Koenig & Bauer China. The new press is not only more flexible than ever before, but is also distinguished by a multitude of innovative technical and design solutions. In fact, it shares the same technology platform as its two sister presses in medium format, the Rapida 106 and the makeready world champion, the Rapida 106 X.

Other highlights in digital print

The exhibition area at the stand devoted to digital print was another drawcard, also attracting lively interest among visitors. This is where Koenig & Bauer is presenting a scale model of its forthcoming VariJET 106 digital press for folding carton production with optional inline finishing modules. A variety of print samples from the first operational press of this type were shown to potential customers, who were unanimous in their praise of both the machine concept and the print quality attained. 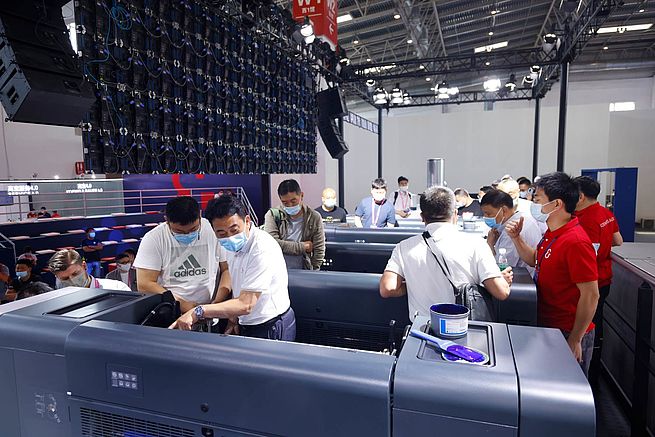 Hands on: Chinese industry professionals exhibited great interest in the press from the very first moment

The extensive range of digitalisation and service concepts that contribute to giving users a whole new experience of Koenig & Bauer's technology also made a positive impression on visitors to the exhibition.

Several Chinese print companies already signed contracts with Koenig & Bauer on the first day of the exhibition. Dongguan Siyu Packaging purchased a Rapida 145 in a five-colour configuration. Shenyang Jixing United Packaging invested in a five-colour Rapida 164 with coater and extended delivery to boost its production capacity for multicoloured folding cartons. And Dongguan Dongyi Printing Company ordered a six-colour Rapida 164 with coating facilities. Koenig & Bauer expects that more orders for presses in all format classes will follow during the remaining days of the trade show, as well as in the weeks to come.